From the period of January,2019 till March,2019 performance of Bitcoin Cash was not up to the mark, with the trend remaining bearish for most of the period. On 29-Jan-19, the coin had reached as low as $109.61. There were several ups and downs faced by the coin until the end of March,19.

There was a steep rise in the BCH price on 3-April-19, post which the coin’s movement has been haphazard. On 26-June-19, it managed to reach a high of $482.58 which was phenomenal growth as compared to figures of January 2019.

It continued with the same trend; BCH could have even reached as high as $500. Unfortunately, it could not survive the bullish trend and prices began to fall. While writing, the movement and trend of BCH was bearish. Comparing BCH coin’s price on 26-June-19 and today’s prices the coin reflects a bearish trend by 37%.

In the near-term, Bitcoin Cash may fall to $290. Considering the huge potential of BCH, it may regain back its efficiency and performance levels after about a week and may reach $317.The coming 6 months or so may be a crucial period for the coin as it may be traded in the range of $296 to $363 with prices fluctuating. 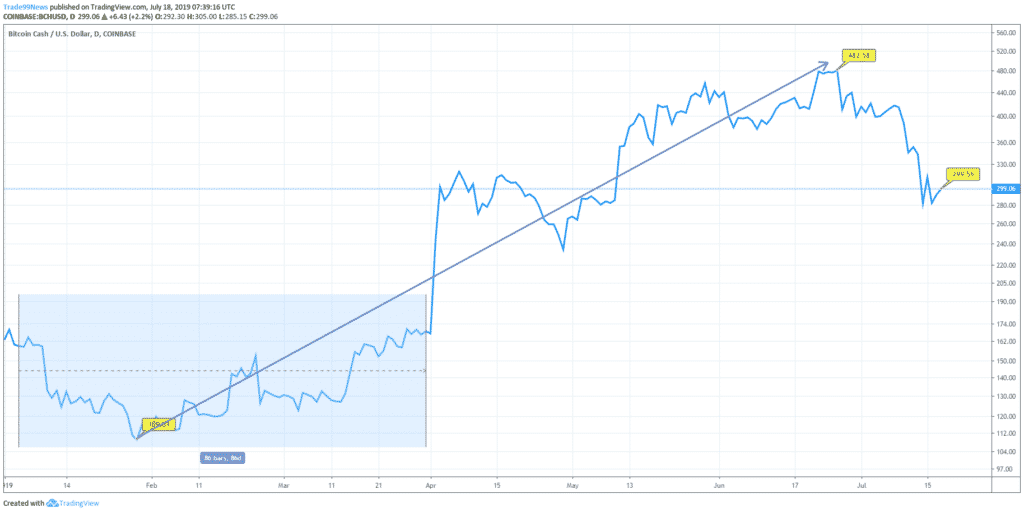 If we look at the long-term perspective, Bitcoin Cash has very good potential to reach higher up in the rankings. Trading on short-term basis on BCH will not be profitable as it is advisable to invest in the coin from a long-term perspective. YTD performance figures have been quite good with 102.36% growth provided by the currency.

Bitcoin Cash has shown in the past that it has the potential to turn the tables around which will eventually be a boon to the investors. The future for BCH/USD is bright and it will eventually manage to prove back its stand.

Jennifer Trowbridge is a lead researcher assistant. She's had her hands on freelance writing for over five years, researching and writing guides, reviews, and latest cryptocurrency news for various blogs. She really believes in the crypto revolution.

Bitcoin Cash Price Comparison: Will BCH maintain its performance standards, or will it start receding over the next few days?

Bitcoin Cash Price Comparison: BCH bulls on the run, next target can be $321.

Bitcoin Cash in better control now, will rise to $308 by tomorrow